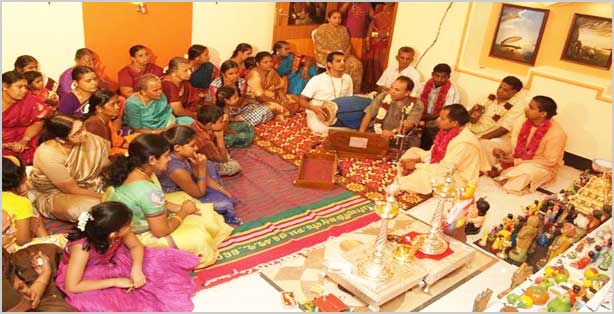 Sampradaya Bhajan or Dakshina Bharatha Sampradaya Bhajan is the tradition of Bhajans (singing songs in praise of God and his divine love and simplicity) in India, particularly in South India. “Dakshina” means “south” in Sanskrit and “Bharat” means “India”. “Sampradaya” means a tradition which is handed down by one’s ancestors. It is the collection of Kirtanas (songs) and Namavalis (songs composed of names of Hindu gods like Lord Rama, Lord Krishna etc.) in a specific order. Marudhanallur Sadguru Sri Venkataramana Swamigal was instrumental in establishing the format and had chosen the songs himself. Later Sri Pudukottai Gopala Krishna Bhagavathar, and Sri krishna Premi were instrumental in identifying the Kirtanas and Namavalis that are to be sung in any Bhajan and their evolution. Swami Haridhoss Giri is one of the principal exponents of the Dhakshina Baratha sampradaya and is regarded by the bhajan fraternity as the sole reason for this traditional form of art to spread worldwide and to reach the masses The trinity of gurus as far as Bhajans are considered as Bodhendra Swamigal, Sridhara Ayyaval and Marudhanallur Sadguru Swamigal. The sampradaya bhajana paddhati has mainly evolved due to the tradition and efforts of Marudhanallur Sadguru Swamigal.